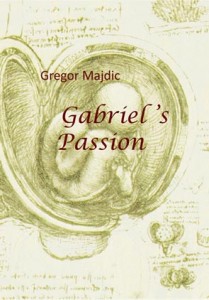 Gabriel’s Passion is a historic novel about the monk in love with the science and his friend, beautiful Lucretia, wife of the nobleman. Story is set in the 16. century, the period when Rome was a hotbed of sin.  For papal throne people paid, bribed, even killed. Diminished church authority was kept together only by the inquisition, set up by pope Sixtus IV. just in time when our heroes grew up in the northern Italy.

At the same time, this was the time of wakening enlightenment and reformation.  In Saxony, Martin Luther was growing up, new universities were established in several European cities, hard and dangerous path from the medieval dark age started for European scholars. Gabriel is a true child of his time.  Illegitimate son of an important clergyman, he is thorn from his young age between love for woman and love for God, whom he also challenges by his desire for knowledge.  Gabriel night by night in the catacombs of the cathedral dissects bodies of dead townsfolk to learn more about human body.  He risks the favor of his superiors, and tests the patience of the inquisition, that does not avoid their town…
Gabriel’s passion (Gabrijelov pasijon) was first published in 2006 by Cicero publishing company.  The book received very good critiques (for those of you who understand Slovenian, here is a link to a review in the main Slovenian newspaper Delo), several critics compared it to Umberto Eco’s The Name of the Rose.

I translated the book by myself so I know the English is not the best as English is not my mother tongue.  Nevertheless, I thought that story is interesting enough that should also tempt English readers who will hopefully forgive me my grammar or style errors.  You can read part of the book here.

If you are interested in either English or Slovenian version of this book you can order them from the publishers at the following links:

A popular science novel that, through a simple story of meetings between old scholar and young boy, describes how humans understood development of new life (from conception until birth of a baby) and why are there differences between men and women. Discussions between old man and a boy reveal what humans thought about these processes through the centuries, from the beginnings of civilization until the present day. If you speak Slovenian, you can order the book here.